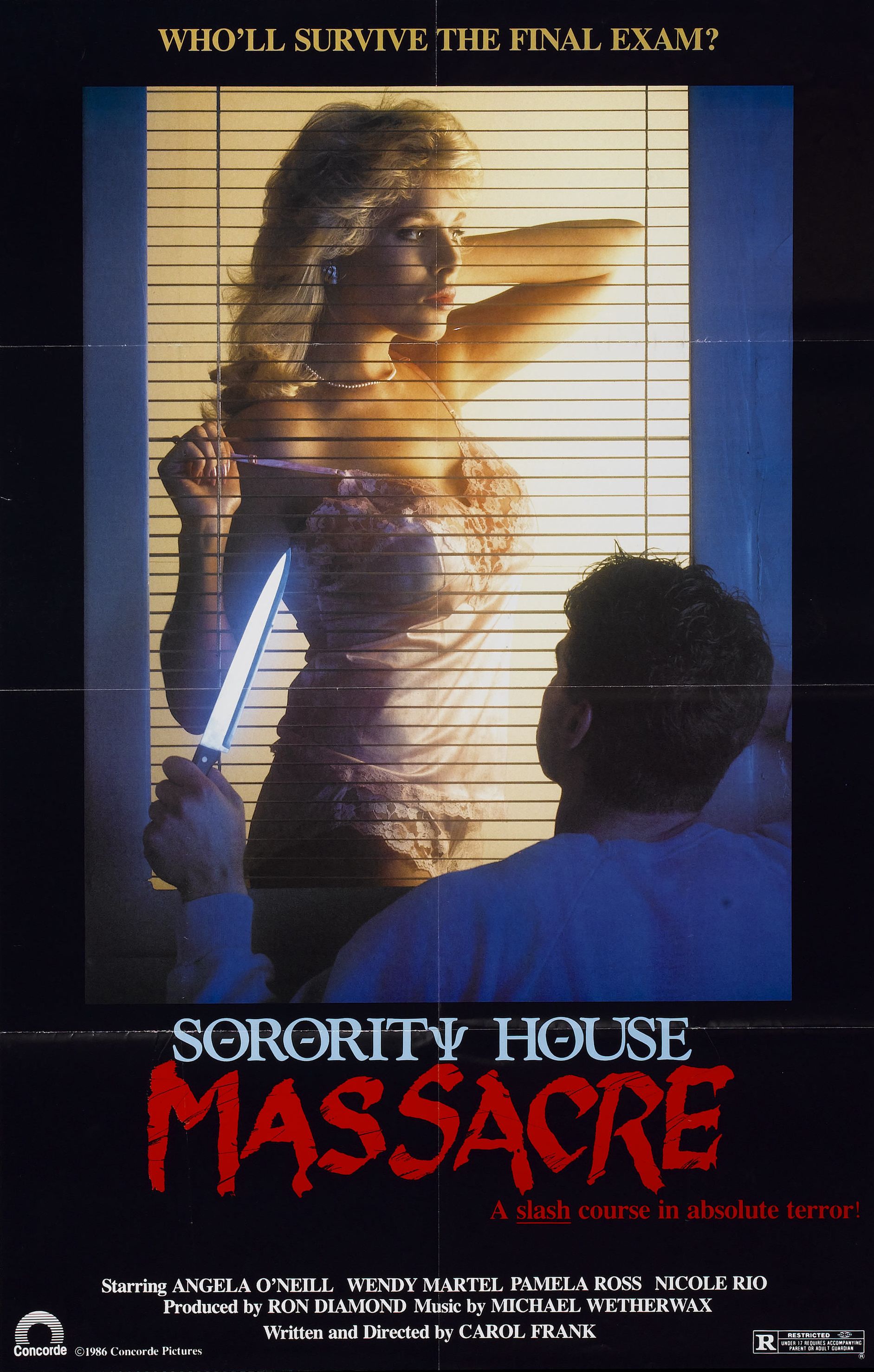 I somehow managed to go nearly 30 years without viewing this gem. As a child, I remember the Sorority House Massacre VHS cover in the rental store and thought it looked pretty menacing. An aside, I first began watching scary movies as a young girl, mostly enjoying USA’s Up All Night and TNT’s Monstervision weekend B-movie series. So I rarely actually checked movies out from the rental stores until I was older. But when my dad and I would peruse the stores after school, I would usually wander off into the horror section and admire the glorious 80s cover art. I digress…

When I saw this cover posted in Netflix, I instantly remembered it from when I was a child and realized I had never actually watched it and added it to my queue. I didn’t let it hang out there for long and sat down to watch it the following weekend.

Much like a lot of great 80s cover art, the depiction is misleading. It isn’t about a rogue, sex-crazed maniac who has carefully selected a sorority house full of scantily-clad, defenseless chicks. But rather, the film revolves around Beth, a doe-eyed college student who is checking out a campus sorority to see if she wants to become a member. Through flashbacks and  scenes at a local psychiatric hospital, we learn that as a child, Beth’s brother Bobby slaughtered their entire family, but was captured before he could kill Beth. 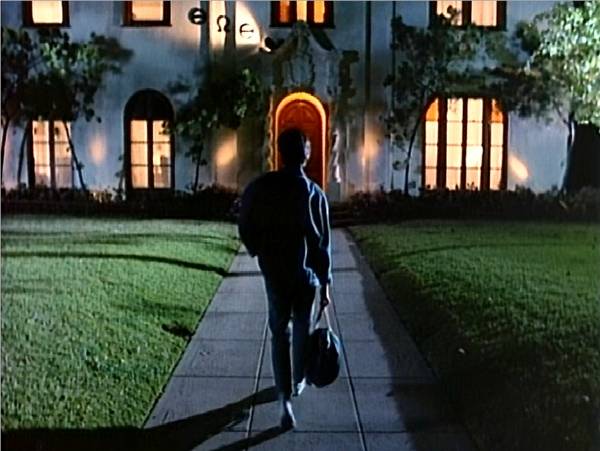 Beth doesn’t remember any of this, and the audience doesn’t officially learn all of this backstory until later in the movie. But the allusions are clear so there’s really no surprise. It’s also not surprising when Bobby escapes the mental hospital and treks back to his childhood home, which is now the campus sorority house.

I will end this relatively vague plot summary here and note that Sorority House Massacre is extremely predictable, but is still fun. The sorority sisters aren’t “naughty” and we only see a smidge of nudity here and there, mainly when the sisters are getting ready for class. And I’m a girl so I can say this, but at no point during my college career-and I lived in the dorms for all 4 years-did I shower or change freely amongst my roommates. So this is just another little silly yet completely characteristic of the B-movie slasher. 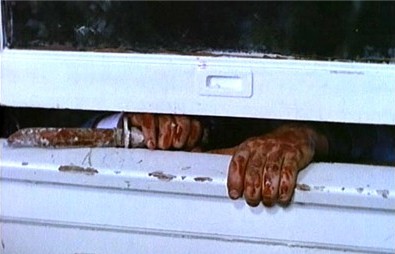 One thing I’d like to add is that I saw this very close to when I first watched the remake of Black Christmas (2006). This is worth bringing up because unless you watch Sorority House Massacre before the Black Christmas remake, then you’ll most likely find yourself comparing the two throughout the viewing of Sorority House as I did. The similarities are glaring, especially regarding the sorority house being the former location of a mass murder and the killer has escaped from a mental hospital to hunt down a family member.

There are a little too many conveniences for me to rate this any higher than a 7-like how Beth mystically finds her way to the sorority house that happens to have been her childhood home. And that Bobby would know his sister is there, or that he would even know how to get back to the house after all those years. But part of the cheese of Sorority House Massacre is B-rated charm so this is relatively easily overlooked. 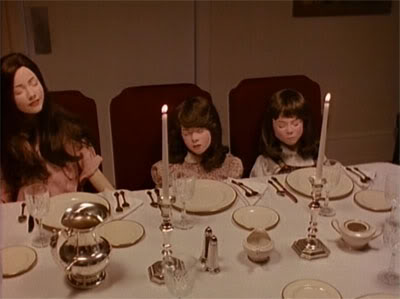 The dream sequences were pretty spooky. There was an eerie scene with the family sitting around the dining table; they looked like mannequins and then blood began dripping from the chandelier. There was also some decent yet tame kill scenes. These scenes weren’t graphic but the gore felt unique (a little reminiscent to me of the Italian giallo style).

Mashup status: Ancestrally speaking, this is the child of Halloween (1978) and the aunt of Black Christmas (2006) with most every cliched 80s B-movie horror gimmick you can think of.